Stray current discharge is not an electrostatic charge build up.
Stray current discharge is usually caused by a normal machine electrical current potential discharging to earth through the machine via an abnormal pathway, eg: A diesel powered generators armature earthing out via the engines crankshaft bearings usually due to the engine ingesting hard particles large enough to breech the crankshaft bearings lubrication film.

R&T is experienced in identifying root causing stray current discharge to assist with preventing damage to machinery and lubricants.

The light pitting detected appears to have occurred sometime back as the pitting was over rolled and smoothed out.

Note the melting and carbonised bottom in the right hand image and the heat colouring in both.

This application is a heavily loaded slow rotation machine making a difficult application to lubricate with extreme loading on the bearings. Stray current burn markings are an ideal initiation point for rolling fatigue flaking and spalling which in turn with heavily loaded applications will lead to total failure of the bearing.
To remedy appropriate earthing straps will be applied to the machines roll shafts to prevent any induced voltages from earthing out through the bearings and the catalyst for these failures will be removed.

The above image indicates Stray Current Discharge in a Diesel Generator engine.

This engine was a new rebuild with all new parts, including the block, assembled into a running engine.

The engine completed 250 hrs when abnormalities were noted and the engine was removed for inspection.

There was evidence of metallic copper transfer over onto the engines crankshaft journal where the #12 & #6 conrods run. 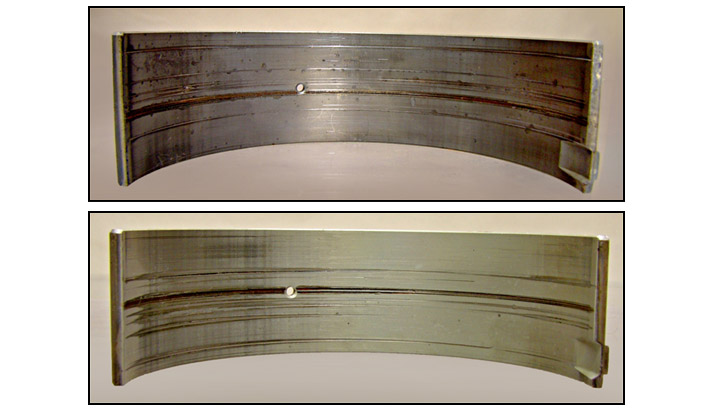 The #12 lower and upper bearing shells displayed corresponding damage through the white metal bearing surface and into the copper bonding layer.
An inspection by microscope confirmed that the diesel engine had been dusted and the large silica crystals ingested has allowed the generator rotor to earth out via the engines crankshaft through the bearing journals insulating oil film onto the bearing shell and out through the engine block to earth.

Note how the surface of the white metal has been electrically removed from high energy electrical discharge leaving the copper bonding layer pitted and eroded.

Note how the surface of the white metal has been melted and cavities formed from the electrical discharge. The engine was carefully inspected to ascertain the ingress path way for the large dirt particles that were bridging the oil film in the crankshaft journals.

There were 5 catastrophic engine breakdowns due to crankshaft failure, Visual condition of engine big end bearings from a haul truck on the site.

This above image is of the pieces of broken engine removed from the sump from one of those failed engines displaying the catastrophic damage caused with all 5 engines a total write off @ $900,000 per engine.

Main Bearing Shell Damage, this surface was inspected with the industrial microscope.

These two images show the lead overlay/embedment layer @ 200X. Note how the layer has been melted and liquified under the oil film by hard particles bridging the crankshaft bearing journals lubrication film and high intensity stray current discharge from the hard particles conducting current from the crankshaft to the bearing shell.

These two images @ 200X indicated the presence of fine dirt and a light three body abrasive wear mode was bridging the cranks shaft 4-5 µm lubrication film thickness electrically connecting the crankshaft with the bearing permitting stray current discharge to occur melting and eroding these areas out of the bearing surface, note the heat colours indicating +300°C was attained when this damage occurred.

Subsequent investigation disclosed the company was recycling the engines air filters by back washing them with air and blowing out the trapped dirt and debris out of the used filter and then putting the “washed ” filter back into use. But unfortunately, the repeated washing and use again of the engines air filters had worn out the <15 µm  filtering layer in the air filter media. The damage to the fine filter layer in the air filter subsequently lead to the dusting of the engines with fine <15 µm dirt. The pumping the fine dirt and silica crystals through the engine bearings on the oil flow enabled the electric drives haul trucks generator to earth its rotor shaft current out through the engine crankshaft bearings resulting in 5 catastrophic crankshaft failures. Once R&T root caused the reason for the stray current discharge through the engine bearings only new air filters are used on the engines and recycling of engine air filters is no longer considered.